Accomplishing the Turkey Grand Slam on a Budget
Submitted by:  TBC Press
Posted on: 03/02/21

Article # A21-3000
Eastern
Avoid the southeast. The birds there are hunted hard, can be tight-lipped, call-shy and hard to tag. Try setting up a hunt in Missouri, the state has a lot of birds and public land.
Rio Grandes
Most people envision hunting in Texas, but Budz prefers Kansas or Oklahoma. Both states have many birds, long seasons and a lot of public land. He also suggests knocking on doors, as many farmers and ranchers don’t care much about turkeys.
Merriam’s
South Dakota is the go-to state for Merriam’s. The state has a lot of birds and amazing scenery, but the weather can be unpredictable in the early season. Budz advises hunting there later in the season when the weather is warm.
Osceola
Filling the Osceola turkey tag may be difficult because the bird only lives in Florida. However, several places in Florida offer over-the-counter tags, and there are some management areas that require a hunter to draw a tag. There always will be hunting pressure, but hunters who hunt hard can tag a bird inexpensively. Hiring a guide with access to private land is an option, but that can be expensive. Budz suggests visiting the Florida Fish and Wildlife Conservation Commission website to do some research.
Grand Slams allow people to hunt all over, see a lot of country and meet a lot of interesting people without breaking the bank. Stay positive, hunt hard and you too can be gripping and grinning with a Grand Slam.
+++++++++++++++++++++++++++++++++++++++++++++++++
GRAND SLAM
The National Wild Turkey Federation recognizes six different slams for wild turkeys, the most popular being the Grand Slam. To achieve a Grand Slam, a hunter must harvest the four most common subspecies of the American wild turkey—the Eastern, Merriam's, Rio Grande and Osceola.
A slam is considered one of the biggest feats in turkey hunting. A hunter must harvest each species or subspecies of wild turkey listed under one of the six recognized slams in turkey hunting to complete a slam. If you want to test your turkey hunting skills and abilities, aim to complete one or all six slams.
The Slams
The NWTF’s wild turkey records database accumulates records on all wild turkeys currently or previously registered to determine who has achieved Grand, Royal, Mexican, Canadian or World Slams. No additional registration forms or fees are due beyond registering individual birds. The completion of a slam does not require the kills to take place in a single calendar year.
NWTF acknowledge slam accomplishments by sending the following:
For more information on Slams see; http://www.nwtf.org/hunt/records/slams
####
Publishers Notes: Our country is still battling COVID-19. To avoid the spread of this virus and continue to enjoy outdoor activities, ALL outdoor enthusiasts (man, woman, child) should follow the guidelines set by nps.gov. These guidelines include; social distancing, the Leave No Trace principles, including pack-in and pack-out, to keep outdoor spaces safe and healthy.
Jeff Budz of Florida has completed a Super Slam — killing a wild turkey in each of the 49 states. He also has more Grand Slams — an Eastern, Merriam’s, Osceola and Rio Grande — than anyone else (As of July 2015, he had 85 registered Grand Slams.)
Budz isn’t rich and believes everyone should take the time to get a Grand Slam, without going broke in the process. He shares his insight on how to accomplish this realistic goal.
Pinch your pennies and plan hard
Budz explains the key to tagging all four birds without spending much money boils down to focusing your efforts on states with long seasons, over-the-counter tags and ample hunting opportunities on public land. 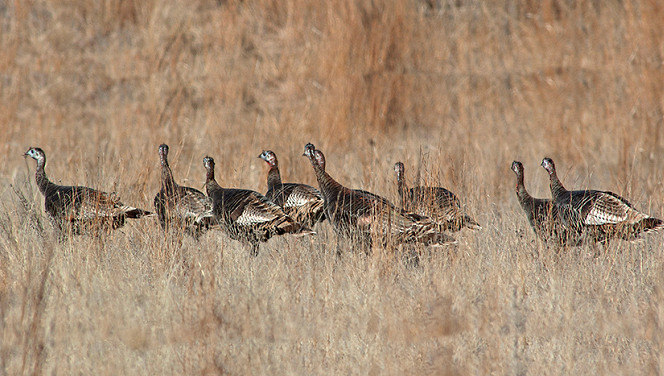