News # 14805
Starzek, a Michigan native who grew up walleye fishing, has targeted record walleye in South Carolina and Georgia throughout the past seven years and crafted a worm rig with a hand-painted lure he designed specifically to land trophy fish in the Tallulah basin.
"It’s a passion for me, and it’s been a long time coming," Starzek said.
Starzek and Edlund were on the water by 6:30 a.m. and trolled less than two hours in the 13-foot Lowe boat before hooking up with the fish.
The men searched for an open store with a state-certified scale for hours before being able to officially weigh the fish at a grocery store in Greer.
Lake Tugalo is a 597-acre mountain reservoir on the Georgia border and is owned and operated by Georgia Power Company.
Fishing South Carolina lakes requires a freshwater fishing license. For more, visit www.dnr.sc.gov.
Image courtesy of SCDNR
####
The S.C. Department of Natural Resources recently certified a state-record walleye caught in the Upstate over Memorial Day weekend.
Chris Edlund, of Spartanburg, and Dave Starzek, of Greer, caught a 10-pound, 1.44-ounce walleye from Lake Tugalo in Oconee County on May 29. Edlund pulled the fish in and is the angler on record, while Starzek netted the fish.
"When it surfaced, we got excited and knew if that wasn’t a record, it was going to be close," Edlund said.
The fish will officially share the state record with a 10-pound walleye caught in Lake Russell in 1994. While Edlund’s catch is slightly heavier, a fish weighing less than 25 pounds has to exceed the previous record catch by at least 2 ounces to replace the record holder.
Walleye require a cool-water habitat not found many places in South Carolina. South Carolina has a small reproducing population, primarily in the Tugalo River arm of Lake Hartwell, that move up the Tugalo River to spawn in the spring.
Georgia Department of Natural Resources has also stocked walleye in Lake Tugalo and Lake Yona over the years. 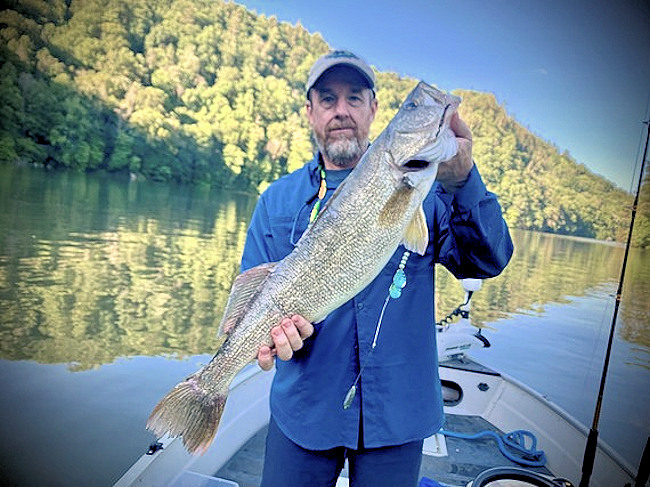 Chris Edlund, of Spartanburg, poses with a walleye he caught on Lake Tugalo in Oconee County on May 29. The 10-pound, 1.44-ounce fish will share a state record from 1994.