News # 14567
Mississippi 2021 deer hunting season opened Oct 1 in DELTA, NORTHEAST, NORTH CENTRAL, EAST CENTRAL, AND SOUTHWEST UNITS. The SOUTHEAST UNIT opens Oct 15.
Bag Limits
Antlered Buck Deer: The statewide bag limit on antlered buck deer is one (1) buck per day and three (3) per annual season. One (1) of these three (3) may have hardened antlers that do not meet the unit legal antler requirements on private land and Holly Springs National Forest. For youth hunters fifteen (15) years of age and younger, hunting on private land and authorized state and federal lands, all three (3) of the three (3) buck bag limit may be any antlered deer. Antlered buck bag limit in the North Central Deer Management Unit (DMU) is one (1) buck per day and four (4) per annual season. No antler restrictions apply to this DMU. All four bucks may have any sized hardened antlers.
Antlerless Deer:
Private lands: The statewide annual bag limit on antlerless deer is five (5). The antlerless bag limit for private lands in the North Central DMU is ten (10) antlerless deer per season. Antlerless deer are male or female deer which do not have hardened antler above the natural hairline. Only two (2) antlerless deer may be harvested from the Southeast Unit. There is no daily bag limit on antlerless deer in the Northeast, North Central, East Central, Southwest, and Delta units. Only one (1) antlerless deer per day may be harvested in the Southeast DMU.
U.S. Forest Service National Forests: The bag limit is one (1) per day, not to exceed five (5) per annual season except in the Southeast Unit, which is two (2) per annual season.
For more information see; https://www.mdwfp.com/wildlife-hunting/deer-program/ or https://www.mdwfp.com/media/253620/21-2021-2022-hunting-season-flyer-web_final.pdf
#### 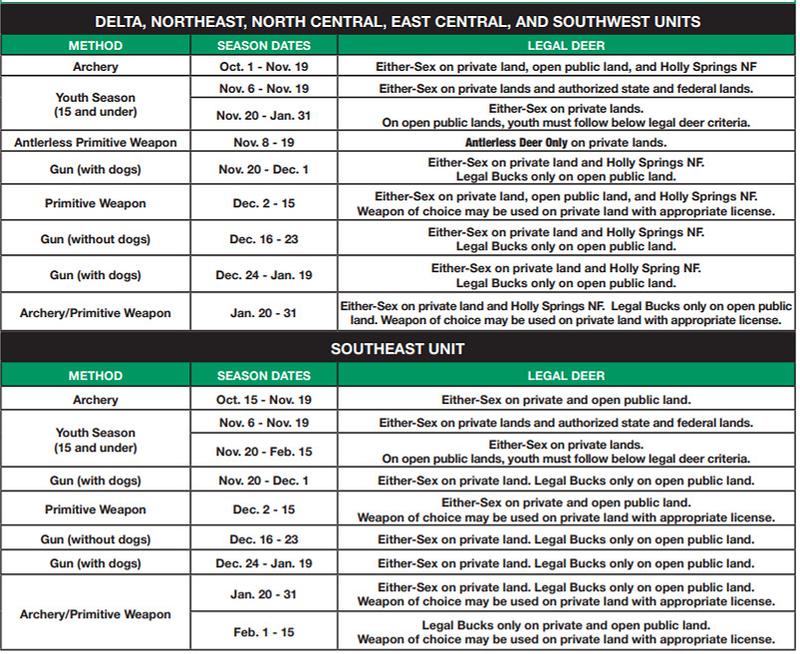