News # 14500
The first controlled Arizona bison hunt inside Grand Canyon National Park will happen this fall at the North Rim.
A pool of 45,040 applicants from around the country has been whittled down to 12 skilled hunters who will go through more training to participate.
The goal of the operation which is being managed by the National Park Service and the Arizona Game and Fish Department, is to reduce the size of the bison herd at the North Rim.
The park service calls the operation a "lethal removal."  It will take place over four weeks in late Sejptember and late October.
The top 10 states from which applications were received are:
Three of the twelve applicants chosen are from Arizona.
Hunting bison in Arizona is a rare opportunity.  Arizona Game and Fish uses a lottery system to issue a limited number of bison tags each year.  A tag allows a hunter to pursue bison in a specific area OUTSIDE Grand Canyon National Park.  For the fall 2021 season, 67 tags will be distributed.  A hunter is limited to one bison kill in hi or her lifetime.
HOW THE HUNT WILL WORK:
The hunt will take place over four week:
Three hunters will take part each week.  They can bring three to five support staff to help field dress the bison and haul it out of the backcountry.
On the first day of each week, all participants will take part in an orientation session.  Hunters will go out into the field on Tuesday, Wednesday and Thursday. They will be accompanied by three to five national park supervisors who will help locate bison and dictate what animals to shoot.
Joelle Baird, public affairs specialist for Grand Canyon said female bison will be targeted because they can give birth and are significantly smaller than males, which would make hauling easier. Male bison weigh up to 2,000 pounds and can stand almost 6 feet tall.  Female bison typically weigh 800-1200 pounds and are 4-5 feet tall.
Friday will be a wrap-up day.  Teams will pack up their camps and provide feedback on how the future operations can be improved.
Image Courtesy of Grand Canyon National Park Service (nps)
Article courtesy of the Arizona Republic
#### 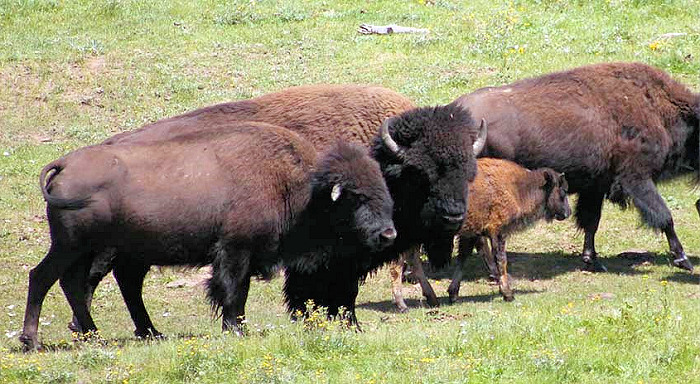