News # 14263
For example, the Starkey unit has not achieved bull management objective in the last five years, 60 percent of the branch bull harvest occurs during the archery season, and tag reductions have only affected the controlled rifle season. If the Starkey Unit alone was moved from general archery hunting to a controlled archery hunt, the Ukiah or other adjacent units would likely see an increase in archery hunters and harvest if they remain a general season.
ODFW is looking for feedback on the draft proposal from hunters before development of a final staff proposal that would go to the Commission. The Commission discussion of archery elk changes is happening at their June 18  meeting to ensure archers can attend the meeting outside of archery season; final 2022 Big Game Regulations will be adopted at the September 2021 Commission meeting.
To comment, please review the proposal and then send an email to [email protected] no later than April 15. (There will be additional opportunities to comment before and during the June meeting.)
This proposal is the latest in a years-long effort to improve the big game hunting regulations and align them with current biological objectives for wildlife and preferences among hunters. As a part of this larger effort, ODFW conducted a statistically valid survey of elk hunters throughout Oregon. From this study it was shown that 75 percent of all elk hunters preferred hunting with a rifle, while 23 percent reported preferring archery.
The general season archery structure for deer and elk in Eastern Oregon began in 1979 (when archery hunting was less popular, technology was limited and success rates were lower) and the current 30-day general season beginning in late August/early September has been in place since 1983. The season was originally intended to draw some hunters away from crowded rifle seasons.
Over the last 40 years, archery hunting has certainly become increasingly popular, with participation and harvest now exceeding limited entry rifle bull hunts in some units. Biologists believe the structure of the season is also contributing to complaints about over-crowding among archery hunters and elk distribution problems, with more elk on private land and fewer on public land during hunting seasons.
For more information about the big game review including public opinion surveys visit https://myodfw.com/articles/big-game-hunting-season-review ODFW will continue to update the page with updated information as we refine proposals based on public input.
####
Publishers Notes: Our country is still battling COVID-19. To avoid the spread of this virus and continue to enjoy outdoor activities, ALL outdoor enthusiasts (man, woman, child) should follow the guidelines set by nps.gov. These guidelines include; social distancing, the Leave No Trace principles, including pack-in and pack-out, to keep outdoor spaces safe and healthy.
ODFW staff are planning to propose changes to the 2022 archery elk seasons to better manage elk populations and hunting pressure in popular units.
Under an initial draft proposal, archery elk hunting would remain a general season hunting opportunity in western Oregon and much of eastern Oregon.  However, several northeast Oregon units (see map) would move from general season hunting to some form of controlled archery hunting to better manage elk populations and more equitably distribute necessary harvest reductions between rifle and archery hunters.
Tags would not be portable to general season hunts, so archery elk hunters would need to choose either Eastern Oregon General, Western Oregon General, or the controlled hunt tag they drew.
More information is available at the Big Game Review page, https://myodfw.com/articles/big-game-hunting-season-review
Units considered for the change were chosen based on the current elk population as well as the challenges with hunter density and displacement highlighted through our public process in 2020. The primary elk population issue that ODFW staff used in refining the archery hunt proposal revolves around post hunting season bull ratios and the individual unit’s bull ratio management objective. Units where the bull ratio (number of bulls per cows) have not met management objectives for three out of five years need a reduction in bull harvest and are being considered to go to controlled archery hunting with this draft proposal. 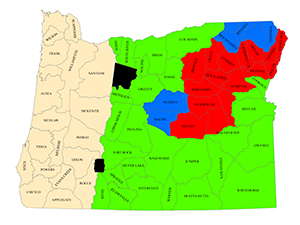 Click Image to Enlarge
“We have tried to craft a solution that addresses the problems we are seeing in some units, while continuing to retain as much general season opportunity as possible,” says Jeremy Thompson, the ODFW district wildlife biologist for the Mid-Columbia who is managing the elk archery review. “We recognize that any change we propose will impact hunters, but we will also be impacting hunters if we do not make a change.
The ultimate goal of this proposal is to be able to make management actions equitable for all users,” he continued. “Currently the controlled rifle season is the one place we have the ability to adjust hunter harvest, and they have taken almost all the tag reductions in the last 25 years.”
Additional units are being considered to change from general archery to some form of controlled archery hunting because although they are currently achieving bull ratio management objectives, they have limited capacity to absorb additional bull harvest.  Many of these units have branch bull harvest in the general archery season that is equal to or greater than the harvest in the controlled rifle bull season.
OR-2022-Initial-elk-Draft-Proposal